Anne chæracter by Bard, peer of St. Matty. Returne to the Maine Page. 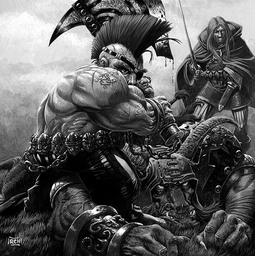 Duerim hails from a small population of tribal dwarves living in the frosty alpine regions. His people enjoy roaming above-ground and dwell in shallow excavated caves that serve as their tribal residences. A belief that the entire world is itself enclosed in an unimaginably vast cavern has kept them from feeling any discomfort at spending time outdoors, but underground accommodations are still their preference in the chilly climate. They make a simple, yet comfortable living off the land and trade with mountain dwarves and other races for manufactured goods and minor luxuries. While long ago the tribes fought fiercely with each other for control of territory and were widely regarded as barbarians, their dwindling numbers have made lives more precious and they have settled into a relatively peaceful existence. The old barbarian ways have become relatively obscure among them, with few keeping the traditions alive. Most simply believe that the tales of ferociously powerful warriors in their songs and stories are exaggerations.

Into this world, Duerim was born to a dying mother and an unknown father. While his mother's strength waned and failed in his infancy, he was healthy and grew quickly, raised collectively by the tribe. It was hoped that he had potential to become a leader among his people however he leaned too heavily on his great strength and resilience, and never developed the grasp of strategy or tribal politics vital to successful leadership. The power in his fists quickly silenced opposition with little regard to merit, and violence was usually his first recourse in disputes. Even as a child, his tendency towards barbarism was troubling for his tribe.

When he was old enough to swing an axe, he was taken aside by the warrior elders trained in the most ancient ways of survival in the hostile wilderness. He traveled with them deep into the forgotten vales and mountain passes where the power of the spirits still lingered. They taught him the ancient ways once followed by the barbarian tribes - how to call on the primal forces of his ancestors and harness his rage in battle. He learned their legends and songs of battle. The elders had hoped that this training would help him to contain his violent tendancies and but the main effect was to make him more powerful and dangerous than ever. He was deeply affected by the experience and longed for a return to the old ways.

Duerim grew larger and stronger than any dwarf in the tribelands on a diet of meat caught by his own hand, and bullied out of his peers when pickings were slim. He chafed at the reluctance of his tribe to strike out at their opponents and take by force what could be theirs. Though not a great leader, he gained the ears of those impressed by his imposing physique and his small gang began harassing the neighbouring tribes, stealing from them and giving out occasional beatings. Eventually, one of his brighter admirers hit upon the idea of a protection racket, and Duerim began extracting payment for the right to hunt on grounds that he claimed. Soon, he extended a fee to the trade caravans passing through the area, in return for an "escort". The caravaners, though capable of repelling his threats, were amused by his antics and content to pay the pittance he demanded. These actions infuriated the surrounding tribes and led them back to the brink of open conflict.

The threat he posed to the stability and security of the tribes was too great to ignore and the tribal thanes agreed that he should be effectively banished for the good of them all. Together they hosted a great feast where they shared with him their "secret knowledge" of the riches that could be gained out in the greater world by a dwarf with the strength to go out and take them. They plied him with copious amounts of alcohol and showed him treasures brought by the caravans from the far reaches of the world. While Duerim had nagging doubts about the elders' motivations, the treasures were real.. he had seen their like on occasions where he'd "escorted" caravans, but the idea of leaving to pursue fortune hadn't occurred to him. A lust stirred within him for fame and wealth. Suddenly it seemed that there really was little worth possessing in this corner of the realm, and much to be had beyond.

The elders had planned to bind him and send him hooded with the caravan once the alcohol rendered him unconscious, but an uncontainable euphoria came over him that pushed the shroud of sleep back. He lept to the table announced his decision to leave and seek his way out in the larger world. At the news that he was going voluntarily, the feast became a bona fide celebration and the tribes that were gathered together rejoiced heartily that a solution had come easily and without bloodshed. Duerim proved as efficacious in jubilation as in battle, and left several daughters of the tribe with the promise of offspring as strong as the very mountain itself before he wandered out of the feast grounds in the early morning.

After many days travel, winding down out of the mountains and alpine forests, he found himself in Odenfell. The town was not as imposing, nor as rich as he had imagined. Still, there was plenty worth taking, sadly guarded by forces far beyond his measure. He knew about guards, soldiers and peacekeepers. The caravaners had told him that civilized folk would take a dim view of his antics and probably give him the beating he needed. That sounded like a challenge, but not one he was ready for yet.

The next part of the plan wasn't well formed in his mind... but the town seemed to have a tavern. He'd heard about those – they were reputed to be good places for drink, food and fighting, all of which seemed very appealing. And so Dureim Gorehammer set off to test the local ale and see if he could fog his mind enough to come up with a new plan.