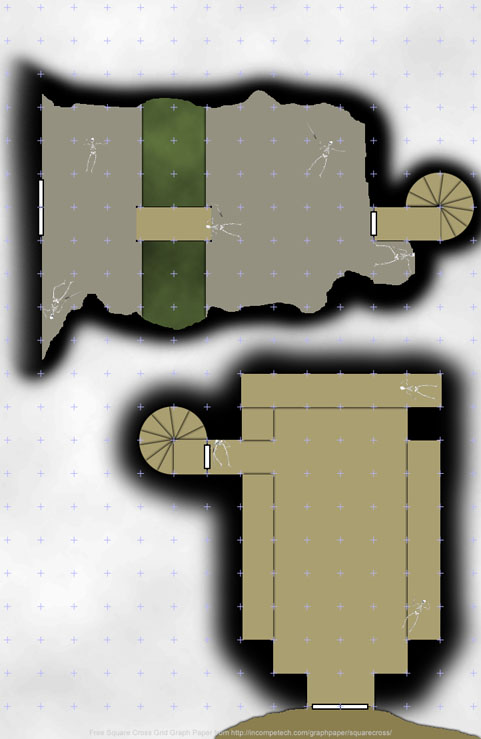 The temple of Iwan-Emuan is dug into the face of a cliff a short way up in the foothills of a great mountain range. The great iron doors, ten feet wide and twelve feet high, are the only outward sign of the temple. Within is the foyer, lined by three-foot raised platforms, the far wall lined by a platform another three feet high. The only light enters from the great doors, and from a tiny light-well set in the middle of the far wall, and the fifteen foot high ceiling rests in permanent shadow.

In the back left corner of the foyer, a doorway leads to a stair which descends in a spiral, two full turns, before issuing into an open courtyard, walled to the left and right, and behind, by natural cliffs, and blocked in front by a masonry wall. Across the middle of the courtyard runs a channel, ten feet wide, filled to a few feet below the lip with murky water, crossed by a flat stone bridge. The water flows slowly from left to right, passing between iron bars where it exits and re-enters the cliffs.

Great iron doors in the wall open outwards; within a broad corridor leads away to the left, up a shallow step. To the right stands a broad pillar. Hidden in the shadows on the far side of the pillar is a button which, when pressed, causes a section of floor to raise forming stairs leading to a secret door.

To the left a stair in the wall leads to a catwalk, passing some ten feet above the floor to a small doorless chamber. Continuing around the corridor, up another low step, the way is abruptly blocked by a pit of acid. A rune in the floor, shaped like a crescent moon with a stroke drawn across it, points to a tiny opening in the wall, an inch square and some ten feet high; within is a button which, when pressed, lowers a forty-foot stone gangplank on great chains from the distant, dark ceiling, bridging the acid pit.

On the far side of the acid is a small alcove with a winch which can be used to raise and lower the gangplank. To the right a doorway opens out into a great, cavernous square shaft. 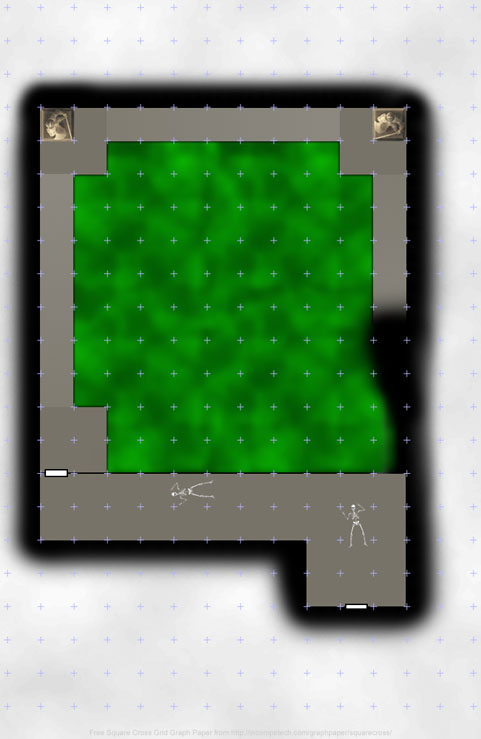 A narrow, unguarded shelf protrudes from the wall of the shaft, descending in a steep spiral. At the first corner the path widens, and on a low step stands a broken stone statue of a knight in armour. Narrowing again, the path continues down three more descents, passing two undamaged statues. The fourth corner widens again, but instead of a statue it has a small wooden door. To the left of this lowest platform you see that the entire shaft is filled with acid.

Through the wooden door, another corridor leads to the left, widening around a corner and blocked by a stone door. 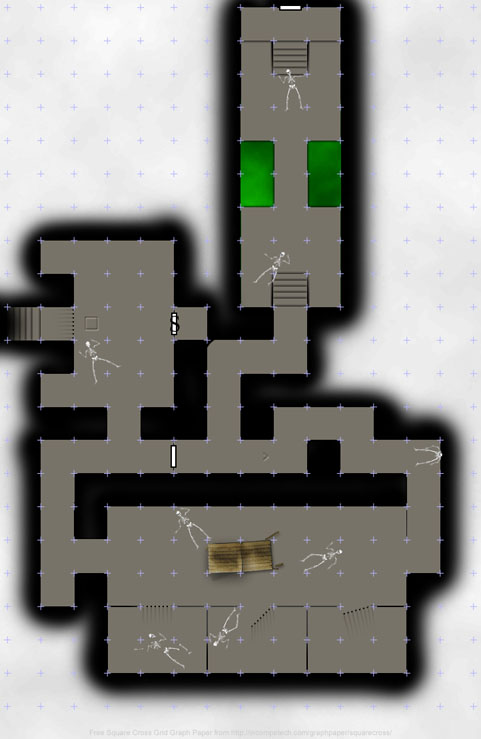 Beyond the stone door is a sunken chamber divided by a small acid pit, bridged by a stone walkway. Stairs in the far wall lead to a narrow, twisting passage that opens in a junction. The way to the right is blocked by a stone door, with neither latch nor keyhole, and to the left a small chevron-shaped rune is etched into the floor tile, its point away from the door.

Following the chevron's point, the passage twists around a U-bend; at its apex, a cleverly concealed flagstone-switch causes a fletchette to fire from a small hole in the wall. Further along the passage, it opens into a larger room; a broken table stands in the middle, and set into the left wall are three iron-barred doors. Behind the doors are three cells. In the far wall a doorway opens into another narrow passage.

In the passage to the left is a small alcove, within which sits a lever. Pulling the lever causes a distant grinding sound; opening or closing the latchless door. To the right the passage bends back around to the same door; however just before the door an opening to the left leads to another chamber.

The chamber has set protruding in the left wall an iron grille; on the floor in front of it is an unobscured flagstone switch. The switch, however, opens a secret chamber on the opposite wall, before which is a cunningly-concealed flagstone switch that lowers the iron grille. 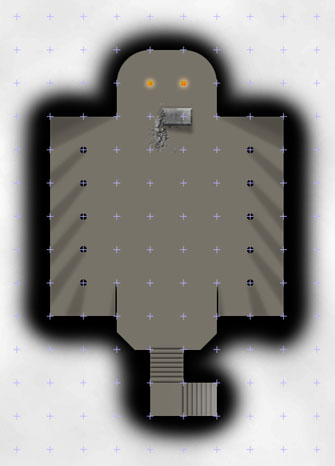 Past the grille, a stair leads down and around to the right. At the foot of the stair is a large chamber, mostly square with pillars lining the walls. The central way leading on in front of you has a raised ceiling, some twenty feet high, and at the far end of the chamber stands a broken altar before a great alcove. Within the alcove stand two polished black stone torches, holding aloft arcane fires that cast illumination and shadows back towards you.