Buried beneath high mountains lies a forgotten stronghold; its doorways open into darkness, and there is no record in any history of how it came to be.

The upper levels of the stronghold are dug near to the tomb of a great lord, buried beneath his own keep in a pass through the mountains, but none can say whether he knew of the fortress below linking to the underdark, or if it was hidden from him in secret, or even if their proximity was pure coincidence.

Nonetheless, a tunnel was dug between the tomb and the keep, the lower end cunningly disguised as a bare wall, so that those who dwelled within might not venture forth.

The tunnel issues through a hidden door into a square room, illuminated dimply by a small brazier, furnished only with a plain wooden table and chair. On the opposite wall a double-door leads to a corridor lined with eight barred cells, four either side. Past the cells, another double door opens outwards from a barracks, with five man-sized double bunks. Set into a corner is the doorway to an ancient armoury, filled with rotten and rusting spears and swords and pieces of armour.

South a door leads to a narrower corridor that opens on a small chamber. To the left through an arch is a room quite brightly lit by torches, containing four crude but recognisable stone statues of kobolds – four life-sized, and one giant, almost man-sized. Straight ahead a doorway conceals a storage room, filled with boxes and crates of foul meat and breads. To the right a short corridor leads to another chamber, with stairs leading up to the south and down to the north. The western way bends right to a doorway, beyond which is a bedchamber, containing a smelly pile of sleeping rags, and a chest.

The southern stair leads to a third chamber with three exits: the way opposite is blocked by a cave-in; and to the right a shallow stair leads to a doorway, however an immesurably deep pit blocks the hallway. The room beyond the doorway is piled wall-to-wall with gold and jewels and treasure.

The northern stair leads down to the main keep. 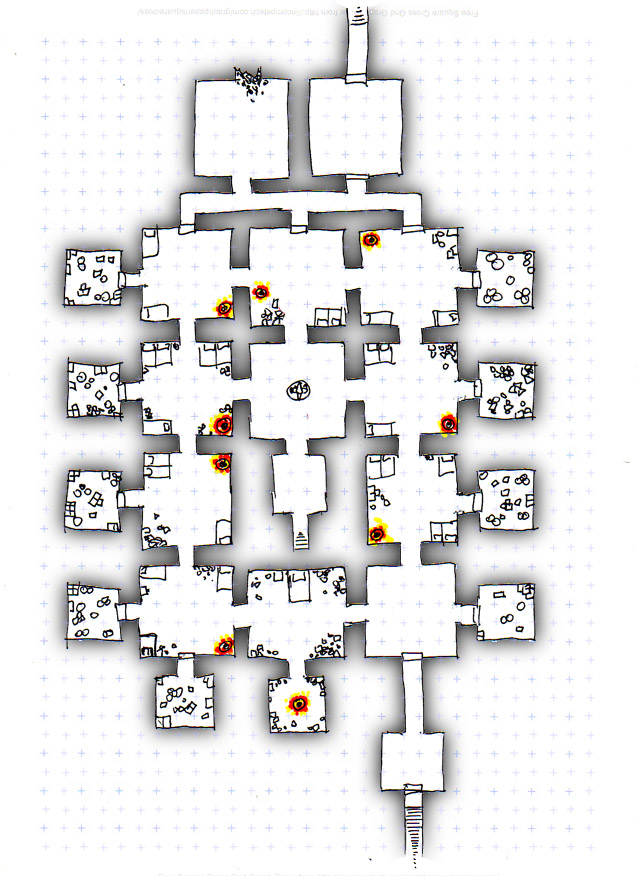 The stair leads to a chamber some fifteen feet square, a small foyer opening onto a larger space, in the middle of which stands another man-sized kobold statue, carved of stone. In all three other directions arches lead to similarly-sized rooms, each containing various piles of sleeping rags, collections of what appear to be personal belongings piled in messy heaps, and small cooking fires. These rooms are layed out in an orderly grid, four ranks of three abreast.

At the east and west ends of the structure are eight smaller, doored storage rooms filled with various boxes and barrels and heaps – enough food and supplies to keep a large tribe of kobolds.

The central southern-most room is richer than the others, and contains only one sleeping pile, larger than any others; south of it is a small private cooking room. The room to the east of the special sleeping place is completely empty, and south from it, through a stone door, is a short corridor followed by another small chamber, with a single door that leads to a long, narrow stair down into darkness.

The three northern-most rooms have stone doors set in their northern walls, which open onto a long, narrow corridor. Two doorways open from on the other side of the corridor: the western doorway leads to a chamber blocked by a cave-in; the eastern has a stone door that opens onto a stair down into a cavern beyond.

Click here to see the main keep after the heroes' rampage.