Anne worlde by St. Matty. Returne to the Maine Page. 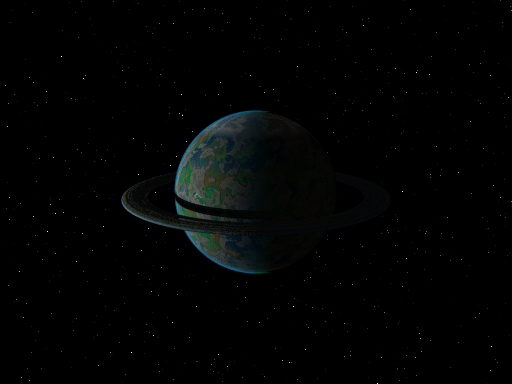 A lonely planet, orbiting its yellow star once a year, spinning on its own axis every twenty-four hours. The planet's axial tilt is very small, resulting in a barely perceptible seasonal variation throughout the year. The poles are both covered with immense glaciers, and chill winds at times blow in all realms. Surrounding the planet's equator is a thick, toriodal ring of ice, rock, and dust – according to legend the remains of a moon destroyed by an insane sorcerer. As a result of the ring, the equator is permanently shaded from the star – a zone of eternal night where nocturnal creatures stalk and shadowy peoples battle to survive.

The same legend that tells of the destruction of the moon and creation of the ring also says that, during the great upheaval that resulted, rocks and fire fell from the sky for centuries, and much of the world's surface was laid to waste. Isolated pockets of life, and even remnants of civilisations, survived, and are slowly undertaking their great expansion, reclaiming the desolate places of the world.

For example: the astronomers of Karall devised a dark room with a tiny pinhole in one wall, projecting a point of light onto the far wall – the height of the point of light reveals the "season".

In the absence of seasons, some people built cunning devices and grand structures for measuring the slow passage of time; however many simply gave up, instead referring to events by recalling what happened before or after.