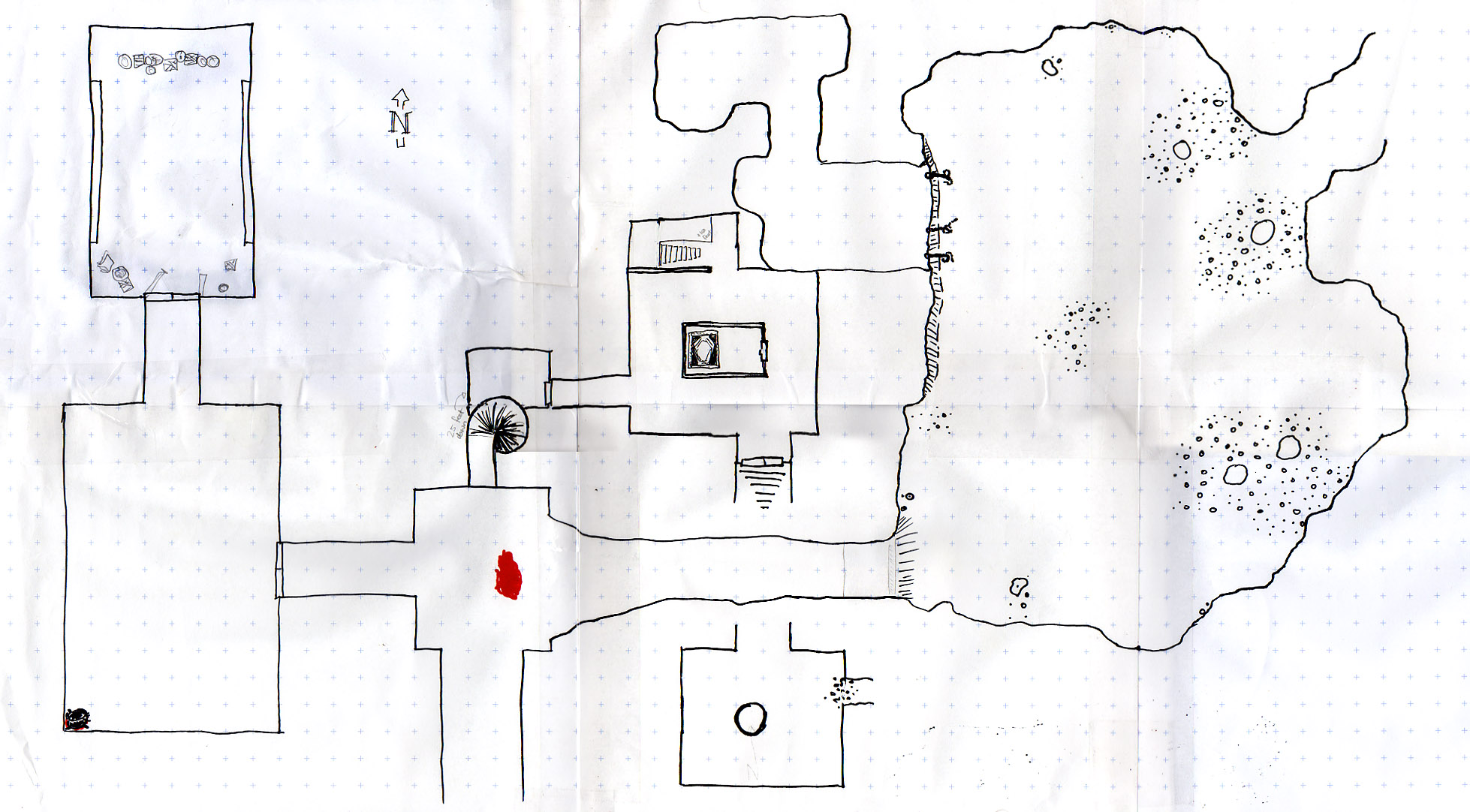 A square tunnel leads north into the cliff face; its square walls reinforced by regular wooden beams and struts. The dirt path is covered with stone debris, a few pieces of which occasionally glint with the slightest hint of ore. It bores into the mountains at a slight decline, and after some hundred feet or so it opens into a small, roughly rectangular chamber. To the west another square corridor leads some twenty-five feet to a closed wooden door. To the east a broad, rough-hewn tunnel descends into darkness.

Beyond the wooden doors is a large rectangular room with four long wooden tables, each with a bench on either side. In the southwest corner of the room a cooking fire lies in a firepit dug into the floor. In the north wall a recess leads to more wooden doors, beyond which is a long narrow room, lined with shelves loaded with foodstuffs and supplies. Heavy burlap sacks are piled atop one another in the corners of the chamber. Several barrels stand in a cluster near the far northern wall.

The rougher tunnel descends for some forty feet, when the floor suddenly drops away into a steeper gradient for twenty feet, before leveling out. The last ten feet of the level area is actually a giant trap door, ten feet to a side, which is tripped by a hidden wire strung across the far edge. At the edge, the tunnel opens into an enormous cavern extending upwards for at least 100 feet, climbing into the bowels of the mountain. Glowing blue-green lichens creep across the rough walls and man-sized stalagmites protruding from the ground, their faint light growing and then diminishing again every few seconds. The illumination occasionally highlights small flecks of silver, which glitter int he face of the great western wall of the cave. Several cables hang down from the edge of a wide hollow within that wall. The hollow penetrates deep into the west face of the cavern and begins about twenty feet above the cavern floor. The air in the cavern feels cool and damp.

A cave mouth gapes at ground level in the north-east section of the cavern. Behind it a narrow tunnel descends a great distance, before opening into a broader chamber. Waves of heat wash through the cave, thickening the air and making breathing difficult. This small, bowl-shaped cavern's floor is littered with humanoid corpses. Rats skitter through the sea of bodies within the sunken floor, pausing occasionally to nibble at a choice morsel. A tunnel's opening is visible in the eastern wall of this chamber and, in the distance, the sound of rushing water can be heard.

Beyond the tunnel mouth is a larger natural chamber. A single, jagged pillar of rock lined with glowing blue-green moss emerges from the shallow pool within the centre. Water courses down its side from a font near its top, cascading into the pool below. The pool feeds a wide stream that flows rapidly along the length of the room then under the rock wall at the southern end of the cave. Several glyphs are carved deep into the stone face of the pillar, their outlines just visible beneath the light of the moss.

Back in the first chamber, concealed in the northern wall, is a hidden door. It leads to a spiral staircase that descends some twenty-five feet or so, and opens eventually into a high-roofed square room with a mausoleum in the centre. The door of the mausoleum, on the far side, reveals a tiny space with barely room for a single large stone coffin, bearing the inscription: Sir Nias þe Warhæmmer. The room itself contains an unusual alcove in the north, and a doorway in the southern wall. Past the doorway is a short, straight stair that leads to a square room containing a well. A rough hole mars the eastern wall of the well-room, almost six feet high and three feet wide; the opening of a tunnel dug into the deeps of the earth – or out of them.