Anne chæracter by St. Matty. Returne to the Maine Page. 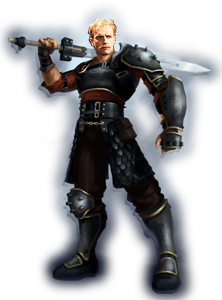 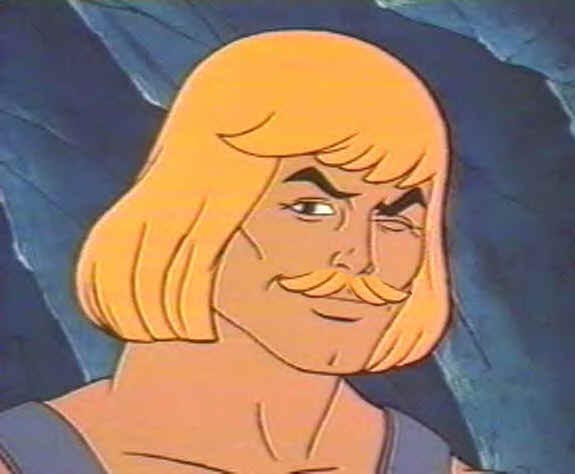 Born to any other family, Walf would most certainly have become a barbarian hero. A big boy, even bigger man, his lack of intelligence has always been more than compensated for by his instinct and great strength. But Walf was born Walfham Percival Montbaton the Third, heir to a derelict but still noble house.

His grandfather's great-grandfather, Theodric Montbaton, ruled a moderate fiefdom near the heart of the Nerath Empire — near enough to benefit from peace and prosperity, but far enough to enjoy a certain autonomy.

However after his death during the Gnoll invasion, and the subsequent disintegration of the empire, the Montbaton line fell from its high station. For the next five generations it dwindled, until Walf was born in a crumbling fortress, attended by a devoted but skeleton household, defended by a handful of men at arms, beset on all sides by the dangers of the wild world around them.

His loving family instilled in Walf a deep sense of honour, justice, and propriety. Through endless training, drilling, and mock combat, he earned a profound understanding of combat and tactics.

Tragedy befell when, during his early teens, Walf's family was driven from their home by an invading force of Dragonborn followers of Tiamat. During the escape, Walf was scouting ahead with a small group of men when his family's wagon was assailed. He returned in time to see his father fall beneath the enemy's blades, and witness the slaughter of his mother and young sister, as well as everyone who had raised and cared for him all his life. Overcome by unbridled hatred and grief, the young man — still a lad despite his size — charged the wagon, laying about him wildly with his sword, killing half a dozen Dragonborn warriors before his sword was shivered and he was slashed across the chest. He surely would have been killed himself, if his scout troop hadn't run to his aide and pulled him to safety.

One scout Tomas, at great risk to himself, managed to recover Walf's father's sword and shield. With these as his only heirlooms, Walf set out in the world, aimless, seeking meaning in life as a blade for hire.

Despite having fairly limited experience dungeoneering, not to mention being as thick as two short planks, Walf believes he is an expert at negotiating all tunnels, caves, keeps, and dungeons. Firmly ensconced in this belief are two facts, to which he clings with almost religious fervour: